Haitian immigrant wants to paint the world in lasting color

Haitian immigrant wants to paint the world in lasting color 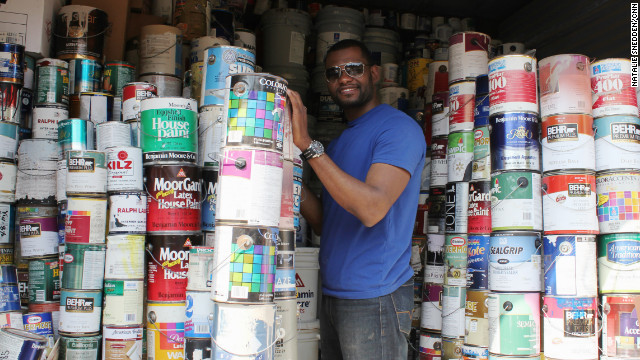 Changing the world with paint

(CNN) -- Rony Delgarde immigrated to the United States from Haiti with only $5 and a Bible. The first thing he saw when he landed at Miami International Airport were all the colorfully painted buildings.

"People paint their house yellow, white, red, blue and I said, 'Wow, there's so much paint in this country!'" Delgarde says." I said, 'When I get money in this country, I'm going to buy paint and take paint back home.'"

From that idea, Global Paint for Charity was born. Delgarde, who is 38 and works as a health care consultant, states the mission: "to recycle leftover paint from businesses and residents, processes it and then donate it to vulnerable families in developing countries all around the world."

Delgarde explains the process for making paint in Haiti.

"We cut down trees and we started fire. We pick out rocks from the river and we put it inside the fire and close the fire for a week. And once it's done, it's a wonderful powder." He points out that this type of paint washes away in the rain.

Two years ago, Delgarde started going to construction sites in the Atlanta area, asking them what they did with their leftover paint.

He told them, "I want to collect your paint and take it someplace where people don't have access to paint. We'll give them paint and we'll change their lives. That's when I started collecting paint."

The U.S. Environmental Protection Agency estimates that approximately 10% of the 637 million gallons of paint sold annually is left over, equal to about 64 million gallons per year.

Those looking to donate their leftover paint can visit the website of the group, GlobalPaints.Org, and fill out a request for a pickup.

Ed Spencer, a consultant in Atlanta, says he donated his paint for several reasons. "Recycling is number one and helping people is obviously number two. I think he's taken something very difficult for people to do correctly, that's recycling paint and created a way to do it and do it safely. And quite honestly, he's made it very inexpensive for people. It can be very expensive to get rid of large amounts of paint."

James Doherty, museum information specialist at the Jimmy Carter Library and Museum in Atlanta, was thrilled to be able to donate the museum's leftover paint to such a good cause.

"I was really excited to hear about Global Paint and the use for the paint in Third World nations because we have such a hard time getting rid of paint, and this kills two birds with one stone. It keeps the paint out of the landfills and it also goes to a good use," Spencer says.

Although he has received phone calls from all around the country, Delgarde gets most of his paint donations from the Atlanta area.

In addition to paint donations, Delgarde also receives monetary donations to help offset cost of shipping the paint. He doesn't do it alone either; he has a board of directors that consists of volunteer small business owners and government officials.

After picking up the paint, Delgarde drives to one of three storage units. "The other units are already completely full," he says.

As he slides up the door to the unit, it's obvious; this one is almost full as well.

"We used to have a small warehouse where we would process the paint. We would separate the paint by color, by brand, by characteristic and then go through a consolidation process. We put it all into five-gallon containers and that we ship to people in the developing world."

Delgarde says that the calls for paint donations have grown from 12 weekly to between 300 and 400 hundred per day. Now, he needs to find a new warehouse to start processing paint again.

"We've been receiving a lot of paint. We need that paint, so we can give paint to everybody, to beautify the world, that's my goal. But we need someplace where we can process the paint," he says.

Students from Georgia Tech have partnered with Global Paint to design a machine that can process the paint. The board of directors for Global Paint has been working to raise the $95,000 it will cost to build the machine.

"We will be able to make 3,000 gallons of paint per day if we have that machine. That would be my dream come true," Delgarde says.

Delgarde recalls a letter that he received from a woman in Uganda who received paint.

"Her painted house uplifted her spirits. She feels happier. She feel the kids bring joy in the house because she can hear the noise, they are so happy. We bring joy with the paint we were able to donate. To me, that touched my heart."