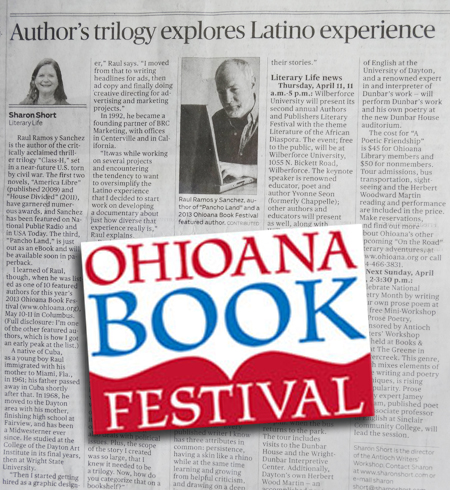 I'm proud to announce the Ohioana Book Festival has selected me as one of its ten Featured Authors for 2013. This honor is based on the release of the third novel in my Class H Trilogy, PANCHO LAND. The Class H Trilogy includes the novels AMERICA LIBRE (2009), HOUSE DIVIDED (2011) and PANCHO LAND…
Continue

A holiday wish for my NSHP friends

Hope you enjoy this digital greeting…

Another Latino has been shot dead in an Arizona home invasion – and the national media is once again ignoring the story. It happened on May 5 and the news is only now surfacing outside the Arizona media through citizen journalism on blogs, Twitter, YouTube and Facebook.

According to the Arizona Daily Star...

“Jose Guerena, 26, a former Marine, was sleeping after the…

An author fights back against Latino stereotypes

Latinos in Social Media has created a program that lets you provide books for disadvantaged youth. Here's how it works:…

I got the news late in the evening and had a hard time falling asleep. The message from Professor Jose B. Gonzalez of LatinoStories said my selection as number one among this year’s list of “Top Ten New Latino Authors To Watch (And Read)” was based on feedback he and his co-editor have received about my debut novel AMERICA LIBRE from readers, librarians, editors, and faculty.…
Continue

Is there a national consensus among Hispanic voters? Did the Latino vote allow the Democrats to keep control of the House? These are some of the topics I will discuss with other guests and callers on "Dialogo de Costa a Costa,"… Continue

Today, I learned from my editor at Grand Central Publishing that AMERICA LIBRE has had another brush with Show Business this month……

<“The Books Into Movies Awards are designed to help change the way Hollywood views Latinos,” stated Olmos during the awards ceremony held October 9, 2009 during the two-day Los Angeles Latino Book and Family Festival at the California State University, Los Angeles campus. “This is probably the most challenging and the most rewarding moment in the history of our book festival,” said…
Continue In an ideal world, human classifications would not exist. Unfortunately, we do not live in that world. In the minds of most Americans, the population of the United States is divided into four major categories: White, Black, Asian and Hispanic. This view is continually reinforced by news reports, the entertainment media, academic and medical studies, and many government documents. But when we examine the basis for these classifications, they quickly become very dubious.

Tonight at 9-11pm EST I will be on BlogTalk Radio Capicu. You can listen online live at the link below and even call in with comments or questions. The show’s host is New York City’s Urban Jibaro, (AKA George Torres) and he promises it will be an interesting event similar to Inside the Actor’s Studio.

I hope you’ll give a listen at 9-11pm EST tonight:
http://www.blogtalkradio.com/radiocapicu

How did my experiences as an immigrant influence AMERICA LIBRE? How did I get published? Who has already voiced objections to the novel’s controversial premise? Discover these and other behind-the-scenes insights during the AMERICA LIBRE “Virtual Book Tour.” Produced by BronzeWord Latino, I will visit 12 online venues in 18 days answering questions from reviewers, writers and readers about my debut novel.

July 29th is a red letter day for me. Today marks the Grand Central Publishing official release of my debut novel AMERICA LIBRE. As you can imagine, getting published by a major house is a long and challenging process. But that’s all the more reason to celebrate the hard work. So I’d like to invite you to share in the fun – and maybe win a little cash.

Here’s how it works: Take a digital photo of… Continue

Beyond satire: The Sotomayor Senate Hearings

The second day of Senate hearings for Judge Sotomayor had a couple of moments so loaded with irony, they could have been satirical skits. Unfortunately, what they represented was hardly funny.

Senator Lindsey Graham, a Republican from South Carolina, berated Judge Sotomayor for her now infamous "wise Latina" comment, saying "they would have had my head" had he made the same comments. These words came from a senator whose state still flies the Confederate Battle Flag on the Capitol… Continue

The terms Christian and Catholic define mutually exclusive groups in the minds of many in the United States. On closer examination, this is an odd distinction. In common parlance, “Christian” is the accepted term for Protestant denominations, especially those with an evangelical bent. Catholics are somehow excluded from being “Christian.” Yet the Catholic faith can trace a direct lineage to the church founded by the apostles of Christ. Ironically, many U.S. Catholics have come to accept the… Continue